Scala lets you create functions that have multiple input parameter groups, like this:

Because I knew very little about FP when I first started working with Scala, I originally thought this was just some sort of syntactic nicety. But then I learned that one cool thing this does is that it enables you to write your own control structures. For instance, you can write your own while loop, and I show how to do that in this lesson.

Beyond that, the book Scala Puzzlers states that being able to declare multiple parameter groups gives you these additional benefits (some of which are advanced and I rarely use):

I demonstrate each of these features in this lesson, and show how multiple parameter groups are used to create partially-applied functions in the next lesson.

The goals of this lesson are:

just put your function’s input parameters in different groups, with each group surrounded by parentheses:

That’s all there is to the basic technique. The rest of this lesson shows the advantages that come from using this approach.

Note that when you write sum with three input parameter groups like this, trying to call it with three parameters in one group won’t work:

You must supply the input parameters in three separate input lists.

Another thing to note is that each parameter group can have multiple input parameters:

To show the kind of things you can do with multiple parameter groups, let’s build a control structure of our own. To do this, imagine for a moment that you don’t like the built-in Scala while loop — or maybe you want to add some functionality to it — so you want to create your own whilst loop, which you can use like this:

Note: I use a var field here because I haven’t covered recursion yet.

The second parameter group is the block of code enclosed in curly braces immediately after that. These two groups are highlighted in Figure [fig:twoParamGroups]. 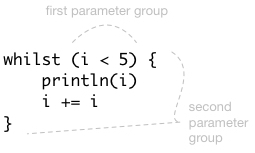 You’ll see this pattern a lot in Scala/FP code, so it helps to get used to it.

I demonstrate more examples in this chapter, but the lesson for the moment is that when you see code like this, you should think:

When I write functions these days, the first thing I like to do is sketch the function’s signature, and the previous paragraph tells me that whilst’s signature should look like this:

The two parameters groups are highlighted in Figure [fig:twoParamGroupsInWhilst].

would immediately be translated by the compiler into this:

and then that code would be further “optimized” into this:

If this happens, the whilst function would receive true for its first parameter, and the loop will run forever. This would be bad.

But when testCondition is defined as a by-name parameter, the i < 5 test condition code block is passed into whilst without being evaluated, which is what we desire.

So far, I showed that the whilst signature begins like this:

In FP, the proper way to implement whilst’s body is with recursion, but because I haven’t covered that yet, I’m going to cheat here and implement whilst with an inner while loop. Admittedly that’s some serious cheating, but for the purposes of this lesson I’m not really interested in the body of whilst; I’m interested in its signature, along with what this general approach lets you accomplish.

Therefore, having defined whilst’s signature, this is what whilst looks like as a wrapper around a while loop:

With that change, the final whilst function looks like this:

Because I cheated with the function body, that’s all there is to writing whilst. Now you can use it anywhere you would use while. This is one possible example:

The whilst example shows how to write a custom control structure using two parameter groups. It also shows a common pattern:

Just by looking at that code, you should be able to answer these questions:

Sketch the signature of the ifBothTrue function. Start by sketching only the function signature, as I did with the whilst example:

Once you’re confident that you have the correct function signature, sketch the function body here:

In this case, because ifBothTrue takes two test conditions followed by a block of code, and it doesn’t return anything, its signature looks like this:

Because the code block should only be run if both test conditions are true, the complete function should be written like this:

One of my favorite uses of this technique is described in the book, Beginning Scala. In that book, David Pollak creates a using control structure that automatically calls the close method on an object you give it. Because it automatically calls close on the object you supply, a good example is using it with a database connection.

The using control structure lets you write clean database code like the following example, where the database connection conn is automatically close after the save call:

If you want to see how using is implemented, I describe it in my article, Using the using control structure from Beginning Scala

A nice benefit of multiple input parameter groups comes when you use them with implicit parameters. This can help to simplify code when a resource is needed, but passing that resource explicitly to a function makes the code harder to read.

To demonstrate how this works, here’s a function that uses multiple input parameter groups:

Notice that the Boolean in the second parameter group is tagged as an implicit value, but don’t worry about that just yet. For the moment, just note that if you paste this function into the REPL and then call it with an Int and a Boolean, it does what it looks like it should do, printing the Int when the Boolean is true:

Given that background, let’s see what that implicit keyword on the second parameter does for us.

You can see how this works in the REPL. First, as an intentional error, try to call printIntIfTrue without a second parameter:

Of course that fails because printIntIfTrue requires a Boolean value in its second parameter group. Next, let’s see what happens if we define a regular Boolean in the current scope:

printIntIfTrue works with only one parameter!

Because boo is an implicit Boolean value and it’s in the current scope, the Scala compiler reaches out and automatically uses it as the input parameter for the second parameter group. That is, boo is used just as though it had been passed in explicitly.

If that code looks too “magical,” I’ll say two things about this technique:

A similar example is when you need an “execution context” in scope when you’re writing multi-threaded code with the Akka library. For example, with Akka you can create an implicit ActorSystem like this early in your code:

Then, at one or more places later in your code you can create a Future like this, and the Future “just works”:

The reason this Future works is because it is written to look for an implicit ExecutionContext. If you dig through the Akka source code you’ll see that Future’s apply method is written like this:

Future’s apply method can find it and “pull it in” automatically. This makes the Future code much more readable. If Future didn’t use an implicit value, each invocation of a new Future would have to look something like this:

That’s not too bad with just one Future, but more complicated code is definitely cleaner without it repeatedly referencing the actorSystem.

After that you can create a Future as before:

The Scala language specification tells us these things about implicit parameters:

I’ll show some of what this means in the following “implicit parameter FAQs”.

No, you can’t. This code will not compile:

The REPL shows the error message you’ll get:

Yes. This code, with an implicit in the first list, won’t compile:

The REPL shows the compiler error:

In theory, as the Specification states, “a most specific one will be chosen using the rules of static overloading resolution.” In practice, if you find that you’re getting anywhere near this situation, I wouldn’t use implicit parameters.

A simple way to show how this fails is with this series of expressions:

When you get to that last expression, can you guess what will happen?

What happens is that the compiler has no idea which Boolean should be used as the implicit parameter, so it bails out with this error message:

This is a simple example of how using implicit parameters can create a problem.

If you want to see a more complicated example of how implicit parameters can create a problem, read this section. Otherwise, feel free to skip to the next section.

Here’s another example that should provide fair warning about using this technique. Given (a) the following trait and classes:

(b) define a method that uses an implicit Person parameter:

and then (c) create implicit instances of a Person and an Employee:

Given that setup, and knowing that “a most specific one (implicit instance) will be chosen using the rules of static overloading resolution,” what would you expect this statement to print?:

If you guessed Employee, pat yourself on the back:

If you know the rules of “static overloading resolution” better than I do, what do you think will happen if you add this code to the existing scope:

and then try this again:

If you said that the compiler would refuse to participate in this situation, you are correct:

As a summary, I think this technique works great when there’s only one implicit value in scope that can possibly match the implicit parameter. If you try to use this with multiple implicit parameters in scope, you really need to understand the rules of application. (And I further suggest that once you get away from your code for a while, you’ll eventually forget those rules, and the code will be hard to maintain. This is nobody’s goal).

That part is easy, but the “magic” in this recipe is knowing that you need to supply empty parentheses when you want to use the default values:

The REPL shows that this works as expected:

I haven’t had a need for these techniques yet, but in case you ever need them, there you go.

In this lesson I covered the following:

The next lesson expands on this lesson by showing what “Currying” is, and by showing how multiple parameter groups work with partially-applied functions.