As a second, smaller goal, I want to demonstrate a few ways that you can look at your code visually to help you “Think in FP.”

Note: This section is written for Unix and Linux users. If you don’t know Unix, (a) I highly recommend learning it, and (b) you may want to (sadly) skip this section, as it may not make much sense unless you know the Unix commands that I show.

One way to think about FP is that it’s like writing Unix/Linux pipeline commands, i.e., a series of two or more commands that you combine at the Unix command line to get a desired result.

For example, imagine that your boss comes to you and says, “I need a script that will tell me how many unique users are logged into a Unix system at any given time.” How would you solve this problem?

Knowing Unix, you know that the who command shows the users that are currently logged in. So you know that you want to start with who — that’s your data source. To make things interesting, let’s assume that who doesn’t support any command-line arguments, so all you can do is run who without arguments to generate a list of users logged into your system, like this:

Some Unix systems may show the IP address the user is logged in from. I left that column off of these examples to keep things simple.

If you didn’t have to automate this solution, you could solve the problem by looking at the unique usernames in the first column. In this case there are four lines of output, but only three of the usernames are unique — al, joe, and tallman — so the current answer to your boss’s question is that there are three unique users logged into the system at the moment.

Now that you know how to solve the problem manually, the question becomes, how do you automate this solution?

The solution’s algorithm appears to be:

In Unix that algorithm translates to chaining these commands together:

A good solution for the first two steps is to create this simple Unix pipeline:

That cut command can be read as, “Using a blank space as the field separator (-d), print the first field (-f1) of every row of the data stream from STDIN to STDOUT.” That pipeline command results in this output:

Getting back to the problem at hand, my current pipeline command generates this output:

and I need to transform that data into a “number of unique users.”

To finish solving the problem, all I need to do is to keep combining more pure functions — er, Unix commands — to get the desired answer. That is, I need to keep transforming the data to get it into the format I want.

The next thing I need to do is reduce that list of all users down to a list of unique users. I do that by adding the uniq command to the end of the current pipeline:

uniq transforms its STDIN to this STDOUT:

That produces this output:

Whoops. What’s that 3 doing way over there to the right? I want to think of my result as being an Int value, but this is more like a String with a bunch of leading spaces. What to do?

Well, it’s Unix, so all I have to do is add another command to the pipeline to transform this string-ish result to something that works more like an integer.

There are many ways to handle this, but I know that the Unix tr command is a nice way to remove blank spaces, so I add it to the end of the current pipeline:

That gives me the final, desired answer:

That looks more like an integer, and it won’t cause any problem if I want to use this result as an input to some other command that expects an integer value (with no leading blank spaces).

If you’ve never used the tr command before, it stands for translate, and I wrote a few tr command examples many years ago.

Now that I have a solution as a Unix pipeline, I can convert it into a little shell script. For the purposes of this lesson, I’ll write it in a verbose manner rather than as a pipeline:

I usually write “one expression at a time” code like this when I first start solving a problem, and eventually see that I can combine the expressions. For example, because the first and last lines of code are impure functions I might want to leave them alone, but what about these remaining lines:

In the first line, because cut is a pure function, res1 and cut(who, , 1) will always be equivalent, so I can eliminate res1 as an intermediate value:

Next, because res2 is always equivalent to the right side of its expression, I can eliminate res2 as an intermediate value:

Then I eliminate res3 for the same reason:

Because there are no more intermediate values, it makes sense to rename res4:

If you want, you can write the entire original series of expressions and statements — including getUsers and the println statement — like this:

As a recap, I started with this:

and ended up with this:

The thing that enables this transformation is that all of those expressions in the middle of the original code are pure function calls.

This is the Scala equivalent of the Unix pipeline solution:

I always find solutions like this amusing, because if you have ever seen Lisp code, condensed Scala/FP code tends to look like this, where you read the solution starting at the inside (with getUsers), and work your way out (to cut, then uniq, etc.).

Note: You don’t have to use this condensed style. Use whatever you’re comfortable with.

“That’s great,” you say, “but how is this like functional programming?”

Well, if you think of the who command as generating a list of strings (Seq[String]), you can then think of cut, uniq, wc, and tr as being a series of transformer functions, because they transform the input they’re given into a different type of output, as shown in Figure [fig:unixPipelines1].

Looking at just the wc command — and thinking of it as a pure function — you can think of it as taking a Seq[String] as its first input parameter, and when it’s given the -l argument, it returns the number of lines that it counts in that Seq.

In these ways the wc command is a pure function:

The one thing that wc did that I didn’t like is that it left-pads its output with blank spaces, so I used the tr command just like the wc command to fix that problem: as a pure function.

A nice way to think of this code is like this:

With that thought, this example looks as shown in Figure [fig:unixPipelines2].

Note a few key properties in all of this. First, data flows in only one direction, as shown in Figure [fig:unixPipelinesDataFlow].

Second, Figure [fig:unixPipelineDataNotModified] shows that the input data a function is given is never modified.

Finally, as shown in Figure [fig:unixFunctionsEntranceExit], you can think of functions as having an entrance and an exit, but there are no side doors or windows for data to slip in or out. 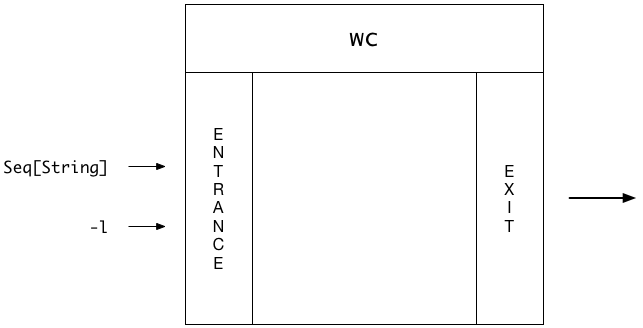 These are all important properties of pure functions (and Unix commands).

There’s another interesting point about this example in regards to FP. When I combine these commands together like this:

I create what’s called in Unix a pipeline or command pipeline. In FP we call that same thing a combinator. That is, I combined the three commands — pure functions — together to get the data I wanted.

If I had structured my Scala code differently I could have made it look like this:

I’ll add a more formal definition of “combinator” later in this book, but in general, when you see code like this — a chain of functions applied to some initial data — this is what most people think when they use the term “combinator.” This is another case where an FP term sounds scary, but remember that whenever you hear the term “combinator” you can think “Unix pipeline.”

At this point it’s worth taking a moment to think about the thought process involved in solving this problem. If you look back at how it was solved, our thinking followed these steps:

Note the use of the word apply in this discussion. Functional programmers like to say that they apply functions to input data to get a desired output. As you saw, using the word “apply” in the previous discussion was quite natural.

As a second example of both “Unix pipelines as FP,” and “The FP thought process,” imagine that you want a sorted list of all users who are currently logged in. How would you get the desired answer?

Let’s follow that thought process again. I’ll give you the problem statement, and everything after that is up to you.

The data source is:

The desired output format is:

The command pipeline needed to get the output data from the input data is:

Do you need to create any new functions to solve this problem? If so, define them here:

That exercise was intentionally a relatively simple variation of the original exercise. Here are a few more advanced exercises you can work to get the hang of this sort of problem solving:

Besides demonstrating how writing Unix pipeline commands are like writing FP code (and vice-versa), I’m also trying to demonstrate “The FP Thought Process.” Because “output depends only on input,” FP lends itself to something that used to be called “Data Flow Diagrams” — or DFDs — back in the old days.

There’s a formal notation for DFDs, but I don’t care for it. (There are actually several formal notations.) If I was going to sketch out the solution to the last problem, I’d draw it like the image in Figure [fig:unixDfdSketch]. 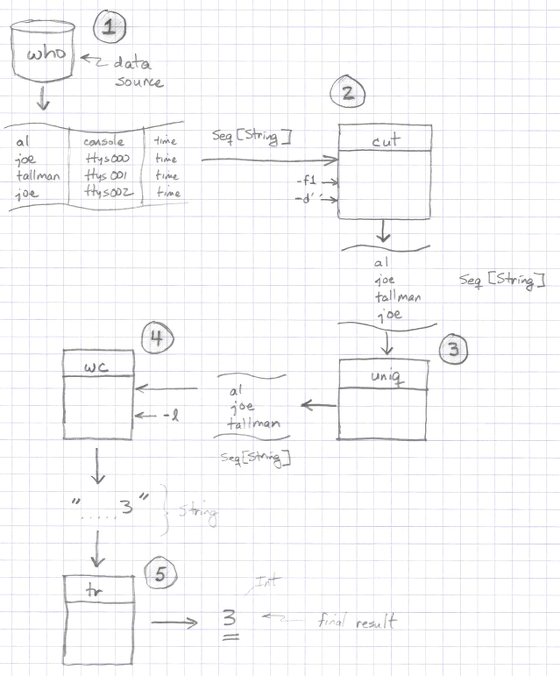 Because I’m using my own graphical drawing language here, I’ll note that at the moment:

I’m not suggesting that you have to draw out every problem and solution like this, but if you’re working on a hard problem, this can be helpful.

If I’m working on a difficutl problem, or trying to explain a solution to other people, I like to draw visual diagrams like that. The book, Complete Systems Analysis, by Robertson and Robertson, defines something else that they call a “Rule of Data Conservation,” which they state like this:

“Each process (function) in the data flow diagram must be able to produce the output data flows from its input.”

Using their diagramming process, the data that flows from the who command would be described like this:

If you take the time to draw the data flows like this, it’s possible to make sure that the “Rule of Data Conservation” is satisfied — at least assuming that you know each function’s algorithm.

A set of Power Point slides at DePaul.edu (that is hard to link to because of the whole “PPT” thing) makes the following observations about data flows:

Just substitute “function” for “process” in their statements, and I really like those last two lines — avoiding black holes and miracles — as they apply to writing pure functions.

One part I didn’t show is a program that runs continuously until the user selects a “Quit” option. But fear not, I will show this in an upcoming lesson, I just need to provide a little more background information, including covering topics like recursive programming.